April 26, 2020
The rising sun in the sun heralds the arrival of summer, the use of cold drinks and foods has begun. 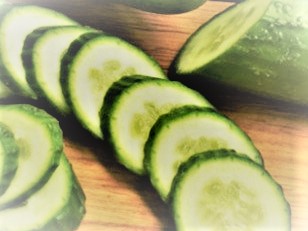 In such cases, hearing the name of cucumber gives a cool feeling, so the use of cucumber is fundamental in salads But in summer, the use of cucumber increases. In hot weather, it is not only eaten or eaten as a salad, but it is also eaten separately by children, old and young.
Cucumber is a cool vegetable that provides cooling and refreshing energy to the body in hot weather. Cucumber not only provides cooling but also contains a large amount of nutrients which are essential for activating the body. Have the status of elements.


Cucumber is a raw edible vegetable. Its plant is bulky. It belongs to the family of pumpkins, melons etc.

Although there are many types of cucumbers, the use of light and dark green cucumbers is common. The history of cucumber cultivation is very ancient. Experts believe that its homeland is in the northern subcontinent while ancient The Romans cultivated cucumber in the first century AD. Columbus introduced cucumber to the Western world and it was first cultivated in Haiti in 1494.
From there, cucumber was gradually cultivated in most of the western countries and now it is widely grown in most of the countries of the world. Pakistan, China, India, United Kingdom, Central and South America etc. are among the important countries producing cucumbers.

Cucumber, like other vegetables, has many nutritional benefits.
It is rich in vitamins and minerals. Eating 2 cucumbers as food provides the body with essential nutrients. Cucumbers are usually peeled and eaten, but nutritionists insist on eating cucumbers with peels. According to him, the important amount of nutrients of cucumber is present in the peel which is lost by peeling.
Although cucumber is mostly preferred raw, it can be eaten in combination with fruits, salads, vegetables, grains, etc. to increase its nutritional value. Contains 0.4 grams of protein, 0.1 grams of calcium, 0.03 grams of phosphorus, 1.5 grams of steel, vitamin A, 0.03 mg of vitamin B, 0.02 mg of vitamin B2 and 7 mg of vitamin C.
Cucumbers also contain important minerals such as sulfur, silicon, chlorine, sodium, potassium, fluorine and magnesium.

Every blessing bestowed on man by nature has been accompanied by nutrition as well as prevention and cure of diseases. Among these bountiful blessings, fruits, vegetables, grains and herbs, etc., contain cures for every ailment that afflicts man. Is.
With their daily use, they can be protected from the expensive medicines and treatments of doctors. Cucumber is also a vegetable with healing properties. It prevents the development of many diseases by keeping the overall digestive system healthy.

According to experts, patients with high blood pressure can bring their blood pressure back to normal by adding cucumber to their diet.
Because the minerals in cucumber improve the circulation of the blood by removing the acidity.

Cucumber is a digestible food. It enables the intestines to supply substances which digest food in the stomach and relieve constipation. In case of constipation, eating 2 cucumbers daily helps in relief for a few days.


Treatment of gastric acidity and ulcers


Useful in case of cholera

Cucumber juice has a very healing effect in cholera. Adding a glass of cucumber juice to coconut water and drinking it every hour reduces the intensity of thirst in case of cholera. In case of dehydration Cucumber juice maintains the balance of body fluids and salts.

Most women try their best to lose weight. They try to lose weight by adopting a special diet plan and X-ray size.
Cucumber is a cheap and easily available recipe that can help you lose a lot of weight. In the morning for breakfast with cucumber slices of tomato, in the afternoon also slices of cucumber with tomato or radish and carrot very well. Chew it and follow it at dinner. In a few weeks you will notice a difference in your own weight.


Natural tonic for the skin

Women have been using cucumber for decades for skin rejuvenation and attractiveness.
Applying cucumber juice on the face and hands brightens the complexion and removes nails from the face. Cucumber carcass is also good for skin and hair.

Beetroot is used in salads, vegetables and meat. Its juice is very popular. Beetroot is also said to be useful in many diseases.

Beetroot is a vegetable rich in nitrate, which is converted to nitric oxide during digestion. Nitric acid helps to dilate blood vessels.
Daily consumption of this vegetable juice is useful in lowering blood pressure.

Nitric oxide widens blood vessels. It provides more oxygen to the muscles, which helps maintain long-term energy. According to a study, beetroot juice restores energy used by physical exertion. does.

One cup of beetroot contains about three and a half grams of fiber. This ingredient helps prevent constipation. This fiber helps the food pass through the esophagus faster and also expels it very quickly. In those who suffer from constipation more There is also a risk of hemorrhoids. Beetroot is also useful in this. Research by Oklahoma has shown that a low fiber diet increases the risk of hemorrhoids, which is why high fiber foods such as beetroot are beneficial to stay safe.

This vegetable has a high content of antioxidants which are resistant to the damage of free radicals circulating in the body. Due to this, it provides protection against many diseases.

Doctors advise pregnant women to eat beets.
Beetroot contains a large amount of iron which is useful in making red blood cells. Most pregnant women are deficient in iron. Beetroot is actually the root of a plant that has a sweet taste and everything from the peel to the inner pulp. Caring is red like blood. It is a favorite food of vegetarians. It has many benefits. It is an effective way to restore energy for athletes, protects against cancer and lowers the level of high blood pressure. ۔
The most beneficial thing in beetroot is the high amount of nitrates in it. Beetroot contains 20 times more nitrate than other vegetables. Recent research has shown that the nitrates in beetroot contain blood pressure. Do less
A study at Queen Mary University in London found that drinking a glass of beetroot juice a day can lower blood pressure for several hours.
Nitric oxide calms and dilates blood vessels, allowing blood to circulate more efficiently in the body. A study by experts found that nitrates not only lower blood pressure but also increase physical energy and endurance. One study found that adults who drank a glass of beetroot juice exercised 16 percent longer than other young people who drank other beverages without adding nitrates.

A study by Wake Forest University in North Carolina found that using beetroot juice can delay the onset of dementia, a type of mental retardation. This is probably because nitric oxide increases blood flow to the brain.
Beetroot also contains a lot of folic acid. About 75% of the recommended daily intake of this nutrient can be obtained from two or three small sized beets.
Folic acid is also useful in protecting against Alzheimer's disease. Beetroot contains a pigment called betacyanin, which gives beetroot its title. It is a powerful antioxidant that has anti-cancer properties. A study by Harvard University in Washington found that beta-cyanine slowed the growth of prostate and breast cancer cells.
German doctors recommend that cancer patients eat at least one kilogram of beetroot daily.

Nutritionists consider beetroot to be useful in treating digestive disorders. They say that beetroot contains a lot of dietary fiber. Beetroot also contains betaine, a substance that regulates gastric acidity. The various antioxidants in beetroot, such as beta lain, vulgaxanthin, and betanin, combine to form glutathione, which is used by the liver to flush out toxins.

April 23, 2020
Asad Shafiq, a middle-order batsman in Pakistan's Test team, has addressed former fast bowler Shoaib Akhtar and said that if he had not been brave, how could he have scored Test centuries in South Africa, Australia and England. Asad Shafiq's reaction came in the Pakistan Cricket Board's video link conversation on Wednesday when he was asked that former fast bowler Shoaib Akhtar had said about him that "you are not brave." In response, Asad Shafiq said he did not need to justify to anyone whether he was brave or not.  Asad Shafiq must have admitted that even after playing international cricket for ten years, he has not been able to reach where he should have been in his career. During his talk, the right-handed batsman said that there were some circumstances due to which he could not achieve a high position but he is still confident that he can reach this position by making full use of his skills and abilities. Are He dismissed the notion that there w
Post a comment
Read more